Rydberg Reactor is the fourth map in Jacob's Rest, the first official campaign. 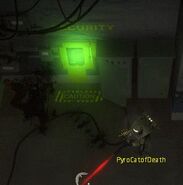 There exists a glitch (whether it is intentional or not is not known) that is found directly at the beginning of the level at the first barrel you encounter. Move above the barrel slightly and then roll south. You should now be on the pipes found there. You can then fall to the level below it and look around.
Retrieved from "https://alienswarm.fandom.com/wiki/Rydberg_Reactor?oldid=24060"
Community content is available under CC-BY-SA unless otherwise noted.