The Queen is a red and black spider-like creature included in the SDK. It is fully animated, but does not make an appearance in the initial release campaign, Jacob's Rest. It has five health bars and can lock players into place while dealing damage to them with tentacles that come out of the ground. It can also enter a "crouched" position to fire a volley of 3 acid shots. It is a boss-type enemy that would have appeared in the unused SynTek Labs map. 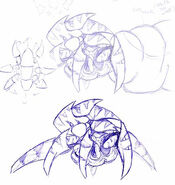 Retrieved from "https://alienswarm.fandom.com/wiki/Queen?oldid=24123"
Community content is available under CC-BY-SA unless otherwise noted.