The infamous first terminal found before the gate. 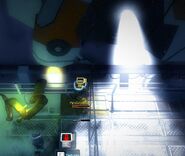 The 2nd hack shortly before entering the unlit Bridge

The dropship Bloodhound assisting players across the bridge.

Completion of this mission can be daunting on insane mode. A well coordinated team is required, and everyone should agree on the tactic they are using. A good route for this mission is to go right upon starting and head north to the first welded door. Set up a defensive point here with a sentry and possibly a damage amplifier as the door is either unwelded or broken open with a chainsaw. Then head up to the first hacking room and clear out the waves of drones. Once the drone waves slow down, kill the two mortar bugs and set up a sentry or two in the hack room. Defend as normal, and wait for all the waves to be killed before exiting the room. Then head up to the bridge and use a stun/freeze grenade on the ambush that spawns. Once the pipe is detonated, it is a good idea to drop a tesla coil for the shield bug. When crossing the long bridge, stay in the spotlight of the Bloodhound and have people facing left and right to hold off drone waves. Running to the mission exit is simple, and the mission is now complete!

Retrieved from "https://alienswarm.fandom.com/wiki/Deima_Surface_Bridge?oldid=24061"
Community content is available under CC-BY-SA unless otherwise noted.